Now THAT Was a Book Reading 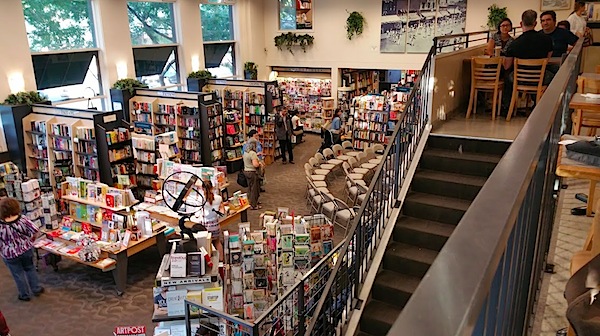 So my book reading at Books Inc in Mountain View happened, and I’m really happy with how it turned out. We had a lot of people show up – more than at first I thought – and there was a lot of positive energy from the people in the audience which made it easy to read. (Note: I took pictures before the event, but not during, because I was the speaker, and that would be just rude). 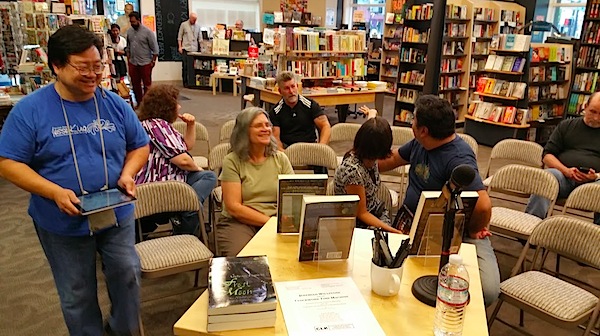 I actually was less nervous and stuttery speaking to this crowd than I was when I was sitting alone in my great room reading the passages I had planned. The thing I’m happiest about, however, is that I planned what I was going to read deliberately.

Normally I read, by reflex, the first section of whatever new thing I’ve got. But sometimes the setup is not that interesting, so I’ve tried reading really exciting bits. But that doesn’t seem to work either – people demand context. 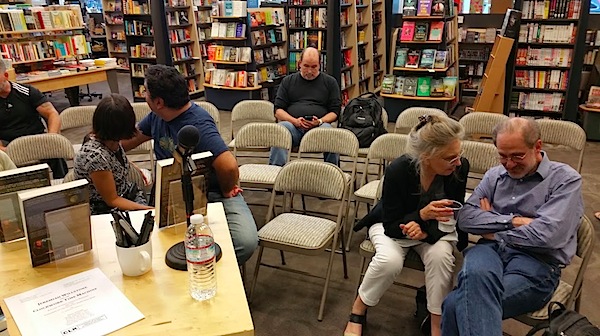 That led to a brainflash: I decided I should think not about what I wanted to read but what I wanted people to get out of the reading. I chose the first page and a half of FROST MOON to set the stage. At the last minute, I also decided to read a page and a half of BLOOD ROCK, filled with police, magic and vampires, to show progression in the world (and unabashedly to show off what I thought was a nice bit of writing). And then I chose to read the first half of a chapter out of LIQUID FIRE, tuning again at the last minute, to show off the action and adventure of “The Battle of Union Square.” People seemed to love it – I even got applause.

What’s more, the sequence of selections enabled me to talk about various aspects of the world I’d built – setting it in a time and place, making the action realistic, exploring consequences – and led into a really good Q&A session. Finally, I left a little time out to read the first chunk of THE CLOCKWORK TIME MACHINE, which also seemed to strike a chord. At the end, we had a line of people for signing, including one who bought a copy of the whole trilogy; many of those joined us for a victory dinner.

At first I thought just enough people showed up to fill half the seats, but I was wrong – there were actually many more people standing and watching who didn’t sit down because they were late. I didn’t see them because I was paying attention to the nearer audience, but I know this because some of them came up afterward to talk to me … and others took pictures and sent them to me. 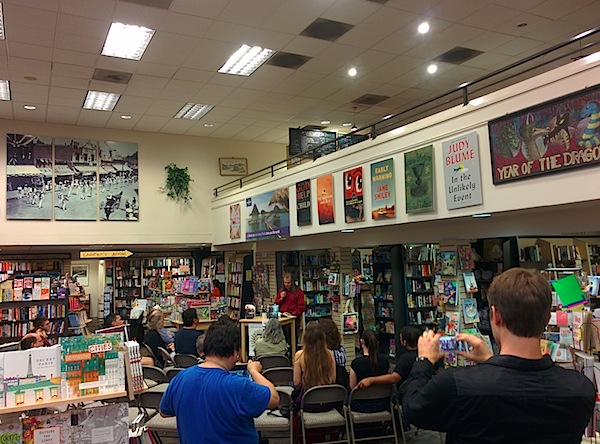 What a wonderful event. I want to send my sincere thanks to Alex, the whole staff of Books Inc, and the staff of the upstairs Cafe Romanza, who have not only made this a great experience for me, but also have made this environment one of the best places I know to sit down, to get some good coffee, and to find and read a good book – or to imagine and write one.