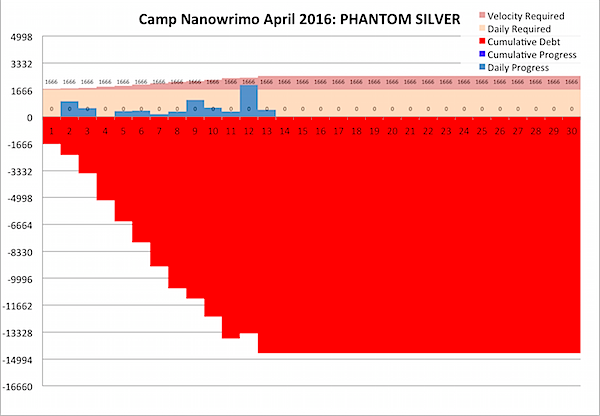 Is the novel back on track? NO. But I am reaching the point where I have enough traction in the story that I’m starting to make real progress. I’m 14,000+ words behind, I need to write over 2,500 words a day to finish my 50,000 words in the month … but at least I’m making real progress now. An excerpt:

The looming tower of Brendelbane Manor leered down at me, its three irregular windows looking even more like a skull. Yes, it was the same room, the nook at the front of Alissa van Kreveld’s room—but was there now flickering light within?

And … was the thing we’d seen Alissa van Kreveld? The phantom hadn’t looked like a Scottish refugee or a woman of Dutch descent; its hair and face had looked distinctly Asian, like a concept drawing for a mash-up of The Grudge and Memoirs of a Geisha.

In horror movies, it seemed like you had a fifty-fifty chance of a ghost being a human ghost or a real demon. My personal experience told me next to nothing about ghosts, but any kind of phantom had a seventy percent chance of being a projectia, and a ninety percent chance of it turning out to be something hostile.

I stopped for a moment. No. That was my bad attitude talking. Chris Valentine’s projectia, the Streetscribe’s projectia, Cosgreave’s specter: all hostile. My Dragon, Arcturus’s vines, Avenix’s tentacle monster: all benign. The odds were closer to fifty-fifty. Even if this ghost had chased us out of the property with phantom fire, it might not be a hostile.

Still … my girlfriend was inside, and this thing spat phantom fracking fire.

Screwing up my courage, I drew my sword, ascended the steps … and went inside.