Persistence is Rewarded, Despair is a Mistake 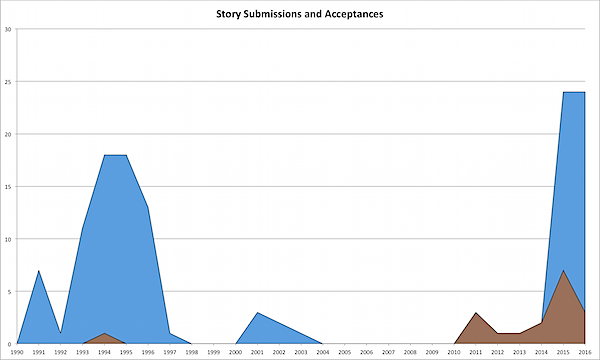 So I’m proud to announce that “A Choir of Demons” was just accepted by Aurora Wolf magazine, with a projected release date of October 1st. More news as that gets finalized, but I’m more interested right now in the process by which this story was sold. Had I acted on feedback which made me despair on the story, I might have changed it ways that ruined it for its right home.

As I’ve documented before, I once sent my stories out to many places, only to get discouraged, and created a narrative that I’d sent them out until I exhausted the markets, and gave up. The reality was that several stories I told myself were no damn good actually got great feedback, but the markets that wanted to publish them went out of business.

Maybe those markets went under because they weren’t accepting better stories, but actually, many, many magazines went out of business right around that time, so I really was in a market contraction – and a time crunch, as I quit work on stories as my PhD ratcheted up, as I cut back writing because of RSI, and because I helped found a startup.

But when I started sending things out again, things got much better. I still get only a 15% acceptance rate, so on average I need to send a story to half a dozen markets or more before I get a success. But my latest story, “A Choir of Demons”, a steampunk police procedural which I wrote specifically for Analog or Asimov’s, wasn’t getting a lot of traction: it racked up almost a dozen rejections.

Most were form letters, but a few had detailed feedback. But that feedback was strange and contradictory. One complained that the beginning of the story didn’t get inside the character’s head … when the first two pages were primarily the protagonist’s reactions to her situation. Another complained the story wasn’t sufficiently standalone, when I tried to make it specifically standalone. And so on.

I was considering a major rewrite, but remembered Heinlein’s famous advice for writers: “Write. Finish what you write. Send your work out. Keep it on the market until sold. Only rewrite to editorial order” and so reactivated my subscription to the story-market service Duotrope, finding another dozen markets I hadn’t seen on the free listings on the similar site Ralan.

I have to give kudos to Duotrope – I found three markets that each responded almost immediately. The first two gave me prompt but nice rejections. The third was Aurora Wolf – whose editor passed on a few kind words which essentially called out “A Choir of Demons” as the kind of thing that they were looking for.

Had I limited myself to just a few markets, I might not have found a right home for “A Choir of Demons”. Had I changed the story to mold it to fit the markets that didn’t want it, I might easily have broken the things about the story that made it a good fit for its ultimate home.

So persistence is rewarded – but the road of persistence can get lonely at times, and it’s easy to lose your way. Don’t despair while traveling that road, or you might drive off the road straight into a mistake.

Published in Steampunk and Writing