Hail, fellow adventurers! And now you know why you haven’t heard from me for a while: I was heads down finishing my wordcount for Camp Nanowrimo! And this is a very special one, because it marks the twentieth time I have won a National Novel Writing Month style challenge to write 50,000 words of a novel in a month! Woohoo! When I started, I never thought I’d finish this many! 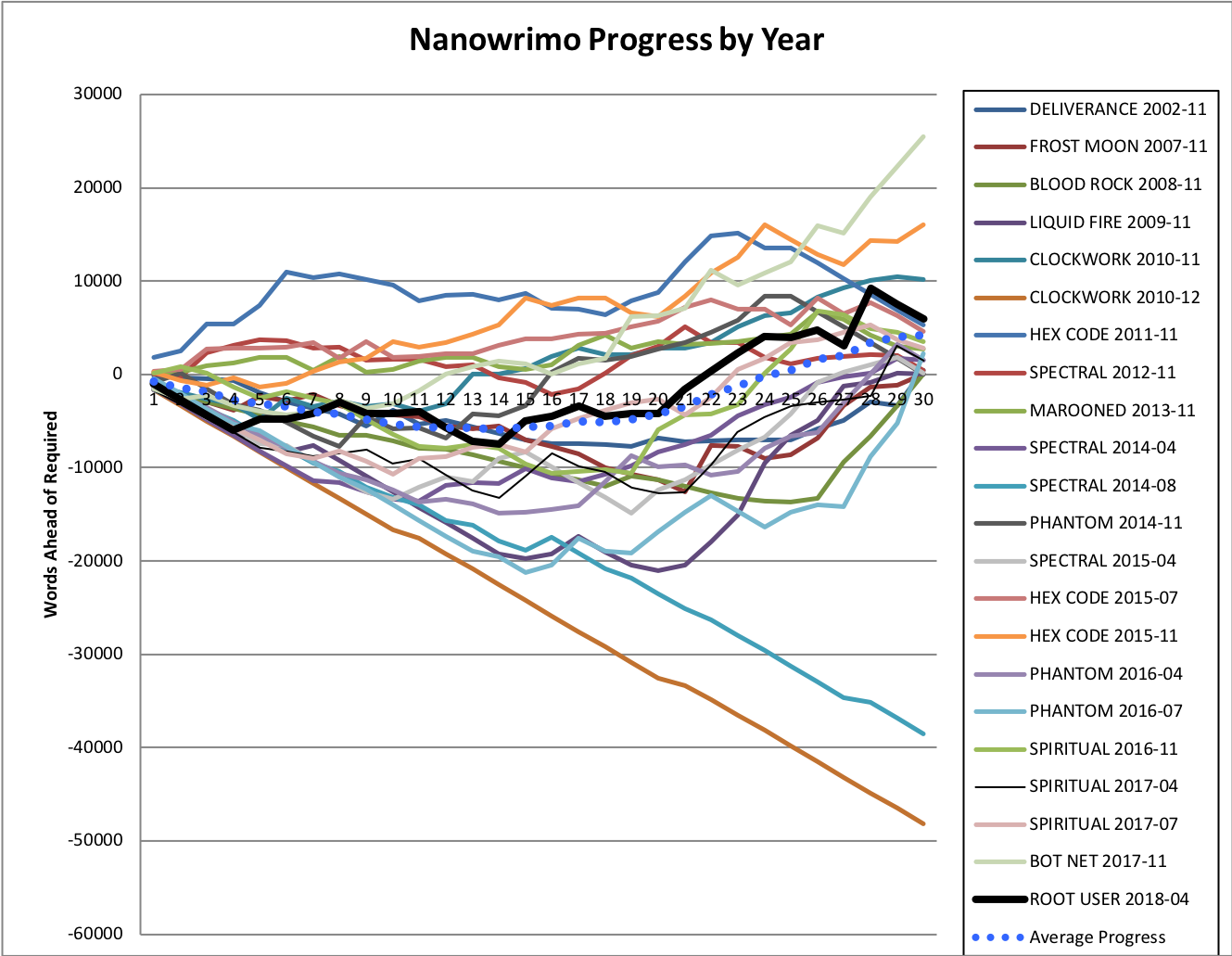 This was a difficult month for it. Sure, I just finished early, but that final push involved locking me in a downstairs room with my laptop until I finished so I could enjoy the rest of my vacation with my wife. And the push up to this point has been hard: my wife returning from vacation, with me scrambling to finish a spring cleaning gone awry before she got home. A cat being treated for cancer. An organization I’m volunteering with had an emergency that involved multiple meetings over the month. Major shifts and dustups at work. Robots, on the loose, being chased down the corridors. Ok, that last one isn’t real. Well, actually, it was, but it was much, much, much more prosaic than it sounds. 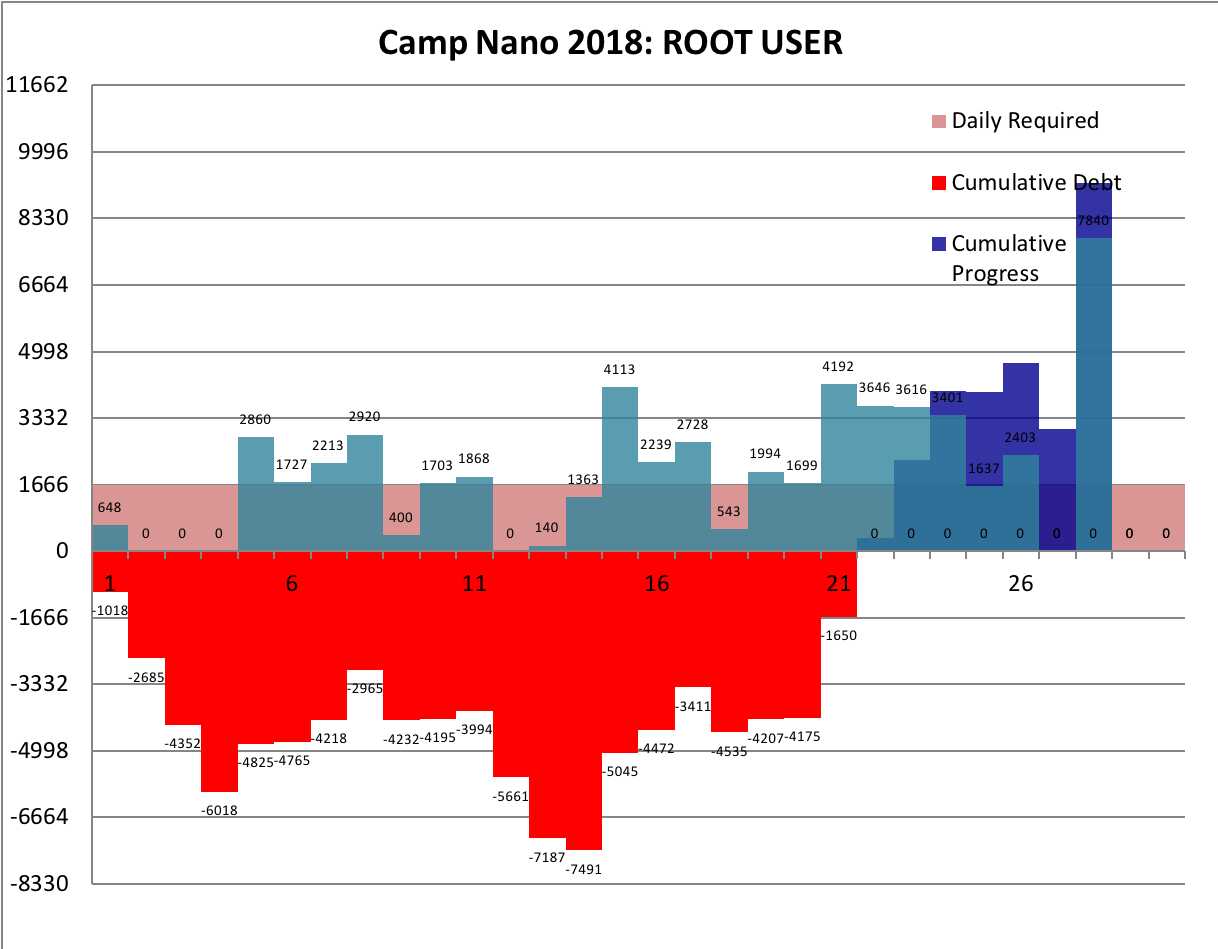 The upshot, seen above, is blood on the water (behind on my wordcount) for most of the month. And with the very last weekend of the month being my long-planned vacation in Monterey with my wife before she flies out on her next business trip, there was a very real danger that I wouldn’t make it. But my wife is awesome, and tolerated me taking out this first evening to do a massive push to get all my words done! 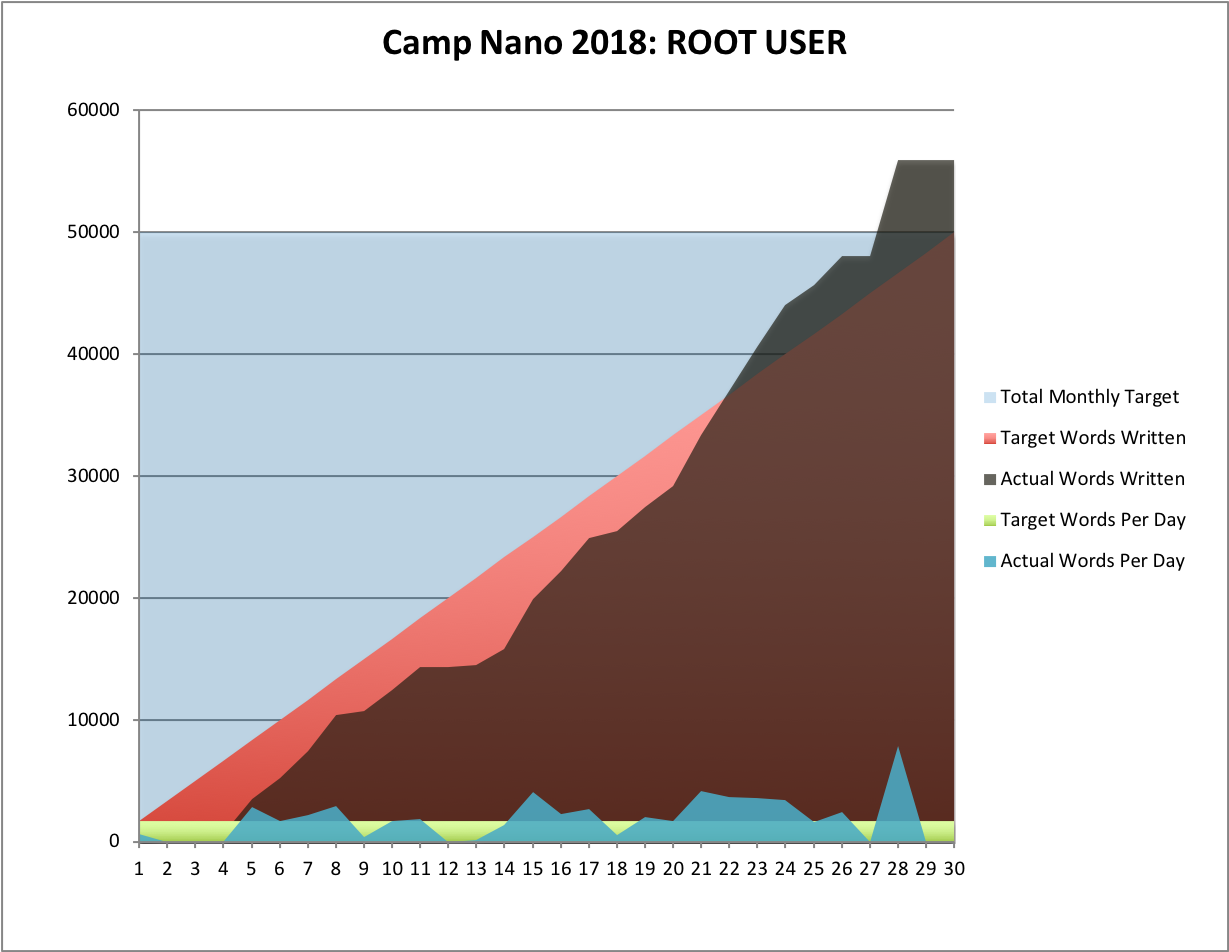 And now, sleep. But first, an excerpt:

“The Ere Mother is … not the most dangerous enemy I’ve ever faced,” I says. “Actually, she doesn’t rate really highly compared to the thing we found in the Vault of Nightmares, which was the real source of the magic that tried to burn down this city, Lady Scara—not me. But the Ere Mother is terribly dangerous, that I admit, Magus Meredith, Elder Jackson-Monarch. She’s terribly dangerous. But I did not ‘unleash’ her on the city. I went where my leadership told me to go and did what they told me to do, and the bottom dropped out under me. Yes, she came to life when I fell into the chambers of her court, but I strongly doubt that she was brought to life by a magic tiger butt. As unstable as that structure was—and it was still subsiding from time to time—the Ere Mother could have been unleashed at anytime, and we’d know even less about her than we do because I was down there investigatin’—as you all asked me to.”

I stands there, quietly.

“Well,” Mom says. “Thank you, First Mage, for your testimony—”

Mom blinks. “Always, as long as we maintain order. You have the floor.”

“How do you know the structure was still subsiding?” asked Meredith.

I stares at him. The hair rises on the back of my head. I thinks very, very fast.

“I heard it from the remaining member of the Dire Court,” I says. “A fox changeling, er, proto-fox changeling, at least I assume it was a changeling—er, anyway, we spoke, briefly, before the Ere Mother attacked. He mentioned a subsidence that, um.”

“That, ah, uncovered his eye, so he wasn’t stuck in the dark anymore,” I says quietly. Meredith’s face falls, with true horror. “There was light down there, from runes. But after the Ere Mother’s attack … I don’t think there’s anything left of the fox fae anymore.”

“That’s … horrible,” Meredith says. “Do you remember what else you spoke about?”

“I will try to reconstruct a transcript. Mostly, he said shit like, ‘Oh, God’, and ‘Don’t hurt me.’” Somebody laughs, and I idly turns towards them and says, “Hey, I was pretty scared. You wanna be pretty scared to, I can always Change into what I looked like down there.”

“Cinnamon Stray Foundling Frost,” Mom says sternly, “if you eat anyone at this Council, you’re grounded!”

Ah, Cinnamon. You and your wacky hijinks with ancient faerie changelings!