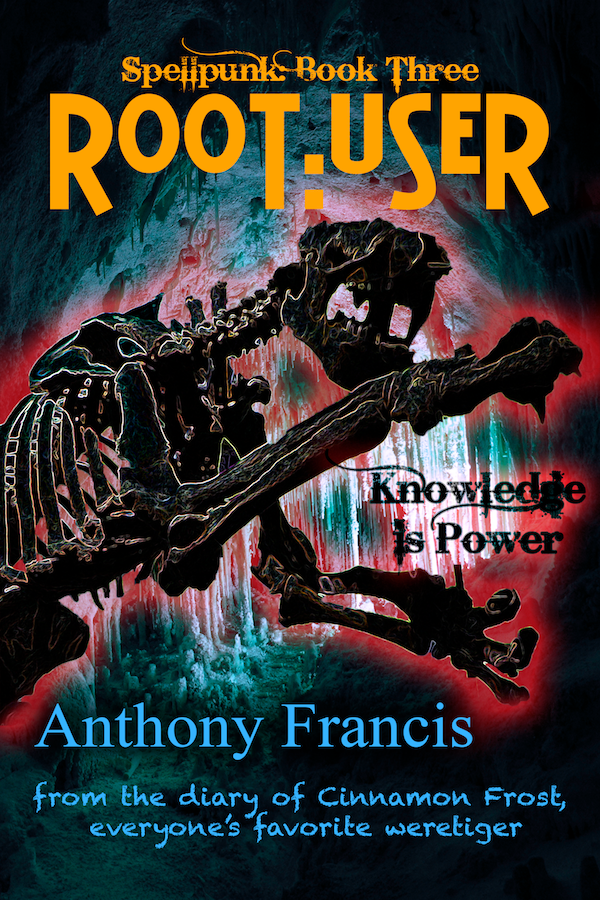 Well, so insanely busy, I haven’t posted in a while. But not for want of working on things that I want to post about! Most pressingly, my Camp Nano project for the July Camp of 2018, and what I hope is the last major chunk of the third book in the Cinnamon Frost series … SPELLPUNK: ROOT USER!

Cinnamon Frost, once-delinquent weretiger stray, is now a rising star in the secretive werekindred kingdom … until she unwittingly unleashes an ancient faerie monster and is banished to the human world as a result. As the monster wreaks havoc on human and werekin alike, Cinnamon must scramble to save herself, save her city – and save her mother, as the monster turns upon them all in its rage.

And, of course, the obligatory excerpt:

I clenches my fist. The fox shimmers, his magic going through my fingers; of course, it’s a magic projectia, not a holographic projection. Mom told me about this: an entombed court of faerie, and the warriors that went back to finish the job. I folds my hands to my breast.

“Only three of us were left,” the fox says. “My shattered body. The queen, entombed in layers of crystal too hard to be destroyed—though she freed herself and left us, I have no idea how. And the other, the Ere Mother, entombed half-alive, half-dead on the other side of the cavern; I have not seen her directly for centuries … until now.”

The hair creeps up on my spine: the cracking and scraping is louder now.

“Did you free her?” the fox asks. “Perhaps she will be grateful—”

I whirls. Behind the shattered iceberg, something looms, a glint of red—and a mammoth bony paw slams down to the iceberg’s right. Rock scrapes on rock, and the crystal-encased paw grinds against stone, formin’ and reshapin’, crystal planes flashin’ intermittently within as it rearchitects itself. Then the lumberin’ split head of the sloth-corpse roars into view, wobblin’ on a half-crystal, half-bone neck, its single red eye blazin’ like a laser.

Red eye blazin’, the Ere Mother screams magic at me in a rasping bellow of rage.

Now, none of the Cinnamon Frost books have been published yet; since Cinnamon Frost #1, #2 and #3 are interleaved in time with Dakota Frost #4, #5, and #6, and since both are loose trilogies, I’ve been working on all six together, in a giant manuscript which would be close to 750,000 words if all put together. Oy! But the outcome is I understand the story much better, and when this giant Hexology is finally put out, I think it will be a much stronger story.

Pictured: a mockup cover for SPELLPUNK: ROOT USER, based on a picture of an eremotherium by Eden, Janine and Jim, and a picture of Doll’s Theater in Carlsbad Cavern picture by Daniel Meyer, both licensed for reuse with attribution on variants of the Creative Commons license.