Viiictory to the Twenty-Fifth Power! 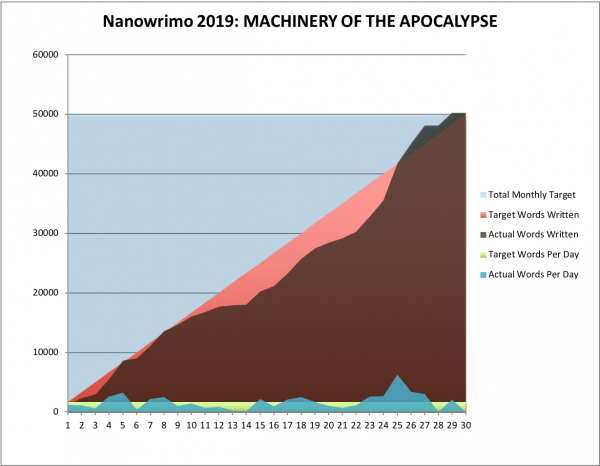 This month wasn’t so bad, though there was a bit of a dip around the time I was writing report cards for our robot learning systems (“Little Johnny 5 tries very hard, but needs to work on his cornering!”). But, as usual, the week I took off for Thanksgiving “vacation” put me back on track: 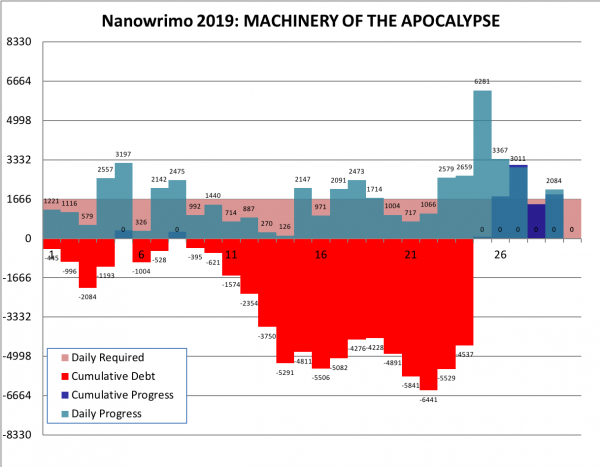 Yes, one day I did indeed get 6000+ words written, which was a record for the 25th of the month, but nowhere near my record of 9074 words – written on the 30th(!) of November 2016, in what I recall was a delerious mad dash sitting on my sofa wracking my brain to produce enough words to make my goal for PHANTOM SILVER. Frankly speaking, that sucked, and since then I have redoubled my efforts to ensure that I’m never THAT far behind. 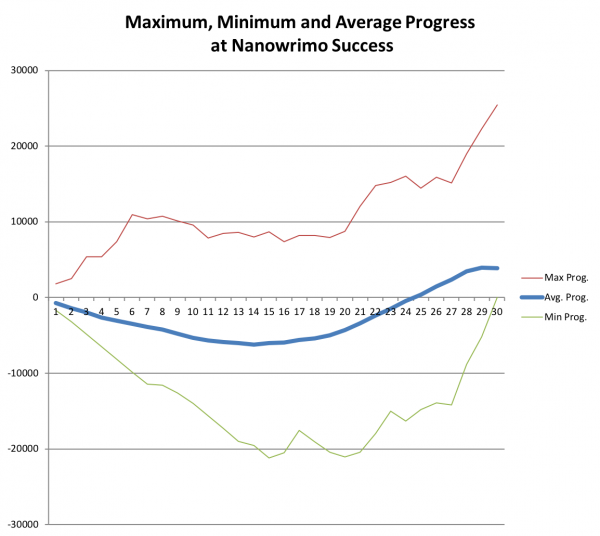 So this month looks typical. It’s interesting to me how much Nano has become a part of my life. First tried in 2002, first made into a yearly habit in 2007, and first made into a thrice-yearly habit (Camp April, Camp July and November Nano) in 2014-2015 … now I’ve done Nano 27 times, with 25 successes, for 1.36 million words of rough draft … it’s a heavy feeling. Do I want to keep doing this? Absolutely. I wish I had more time to, like, edit my books, so I didn’t have a backlog of 6 finished novels, 2 novellas, and 5 partially finished novels. (Gulp!) But I like having a roof more, and the time and money to pay for my laptop, my nice dinners, and my late nite teas and mochas, so, teaching robots to learn by day it is, for the time being. One of the most interesting things for me is how Nano breaks through your creative barriers. When I started on MACHINERY OF THE APOCALYPSE, then titled TWO YEARS OF HELL, I had the idea of writing an action-adventure steampunk hard science fiction story around computer science concepts, and conceived it as a connected tale made of 16 short stories  — two to the fourth power, a number beloved of many computer scientists.

But as I’ve written, the story has sprawled out from my original design, and there are at least two, perhaps three set pieces which may demand their own stories. Or perhaps existing stories will have to be cut or deleted. I don’t know; I just create the worlds, but once they exist, they follow the laws of physics (plot and character physics). Here’s an excerpt from one of those diversions, which may or may not make it into the final design:

The dark doorway loomed before her like a maw. Jeremiah steeled herself: she had been her at best a handful of times, but she felt like she knew every rivet of the damned hatch, felt like she was right back to waiting on the damn Keepers while they prepared themselves.

Yet she was, not a child, but a Major. She straightened, nodded.

“Major?” asked Thompson, looking back at her. “You look a bit green.”

Jeremiah smiled, to give herself a moment to speak. What would a cracker-jack young major say? Or … wasn’t that putting on airs? What would General Weiss have said? Perhaps she should just be … honest?

“Good eye, sir, but I don’t just look it: I feel it too,” Jeremiah said, forcing a grin—was that fake, or did she just want to take this in the best humor possible? “Every time I’m here, it takes me right back to my childhood.”

“Childhood?” Thompson asked. The white hairs in his saltpepper eyebrows sparkled as his brow beetled. “Why were you here as a child?”

Thompson stared at her strangely, then turned away.

“I would have let you,” he said at last. “Seems to have been the first step into forming a fine soldier who doesn’t flinch.”

“That’s the Major Willstone of my reports,” Thompson said. He leaned over and said a bit cheekily. “I hear you scream like a girl even when you’re firing both blasters at point-blank range—”

“Why, I never—” Jeremiah colored. “Well, that does speak to character—”

“Yes, yes, it does,” Thompson said, “and to good sense. Alright, in fairness: the report just said ‘cried out in shock before blasting the thing,’ but one could imagine the girlish scream—”

“Er,” Thompson said, as the hatch opened. “I … don’t recall. Frankly, Major, with your record, the monsters start to blur—”

“Not all of them,” Jeremiah said, striding forward with a projected confidence she absolutely did not feel. “Have a look at that.”

Enjoy. Back to writing!