So it’s that time of year once again: I’ve won Nanowrimo, again, by writing 50,000 words in the month of November; by my records, this is 28 straight wins (counting Camp Nano in April and July in the mix) for a total of … holy cow … 1.5 million words in successful Nano challenges.

Welp, I’m calling it: Nano is the most successful technique I’ve ever used to to boost my writing output — more than morning pages, more than writing workshops, more than the Artist’s Way — with the possible exception of Write to the End, with which Nano is intimately intertwined (for me).

Now I hear my editor calling: How about boosting that editing output, Francis? I hear you. Writing I don’t seem to have much trouble with, but between robots and the zombie apocalypse I’ve found it hard to get the necessary brain juice to edit the 7, no 8 manuscripts I have in the queue.

Come to think of it, why couldn’t we have had the zombie apocalypse while I was writing about a zombie apocalypse? Covid would have been really thematically appropriate when I was working on BOT NET (Facebook zombies) or SPIRITUAL GOLD (actual zombie zombies).

But that was not to be. I don’t know about you, but I find the whole zombie apocalypse thing wearing, not to mention the whole election thing. Add to that serious realignments at work, which meant basically reinventing everything I’d been doing to come back to the same place, and 2020 has been a full on freight train of suck.

Not that everything’s been bad. I finished the bulk of a novel, JEREMIAH WILLSTONE AND THE MACHINERY OF THE APOCALYPSE, back in April, and I’m halfway through Dakota Frost #7, SPIRAL NEEDLE. We finished our patio here … 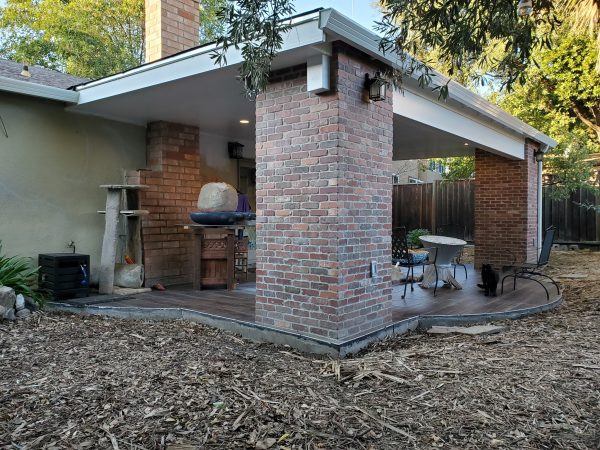 … and started a grand new vegan cooking adventure together … 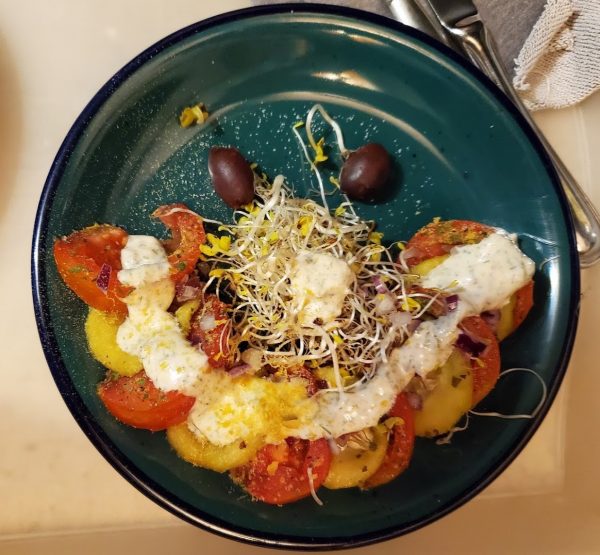 And we even found and bought a new house, a very nice new place (it has turkeys) … 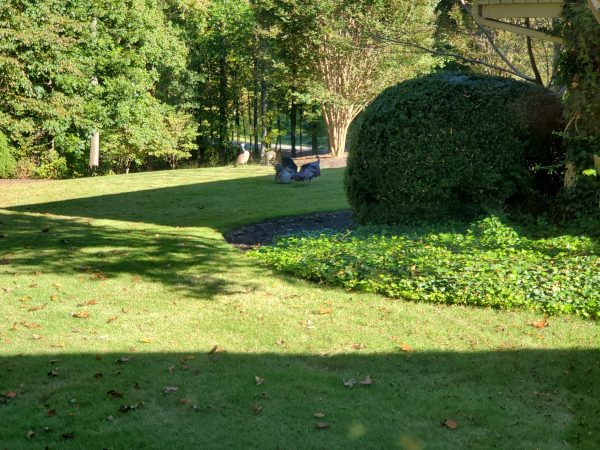 … with a great space for my library and my wife’s art studio, which we’re in the middle of a slow motion move to while we renovate the old pad. These have been bright lights in an otherwise bad year. By you know how it’s been: so stressful that – well, you’ve seen how much I’ve been blogging. I feel like this should be the best time ever in my life, yet 2020 has left me feeling a lot like this: 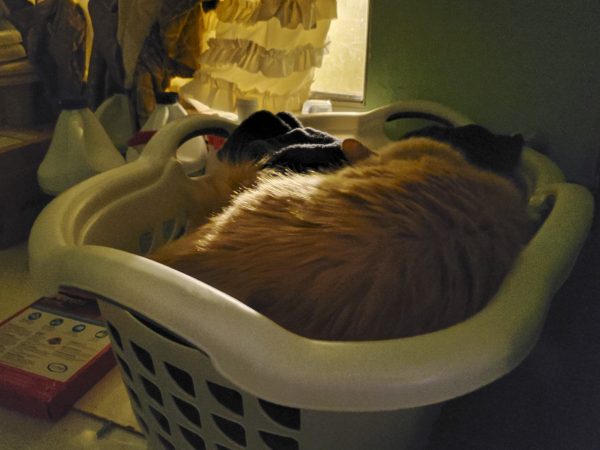 But, we have traditions which can help us through, like Thanksgiving … oh, dangit Covid! So, ANYWAY, other traditions that do not involve Covid or Zoom, Nano traditions: the stats, and the excerpt. What did this month look like, Nano-wise? 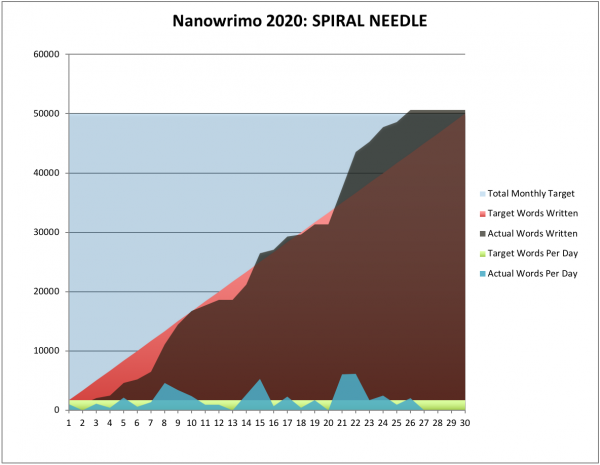 This wasn’t the hardest Nano I’ve handled … I think the worst was being over 21,000 words behind in 2016 for PHANTOM SILVER, though briefly LIQUID FIRE in 2009 got almost that bad. Nor was it record-breakingly productive, like the astounding 25,000 words ahead finish on BOT NET 2017. This was a middle-of-the-road Nano, helped by really pouring on 12,000 words last weekend: 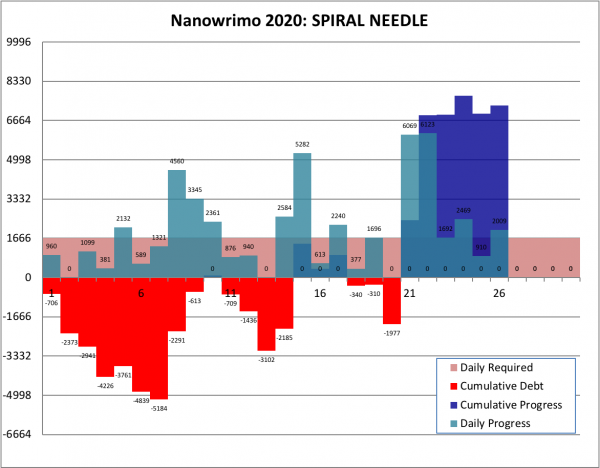 That was on purpose, so I could coast into Thanksgiving having finished, and spend a very nice dinner with my wife. (We had vegan muffulletas with authentic olive salad filling shipped direct from Central Grocery in New Orleans, which I highly, highly, highly recommend). That left November’s work on SPIRAL NEEDLE comfortably in the middle of my previous efforts:a

Too late, I realized the thickening arms of the octopus mist echoed the ghostly glow of the streetlights. “Teleporter! We’ve got to find a weakness!” I cried, flicking and snapping my wrist to loose a crossbow bolt, a feather from my origami peacock—an analysis spell.

The feather flitted out, replicating itself in the flood of magic, its unfolding structure revealing an intricate, oh so intricate pattern embedded in the misty galaxy. Unfortunately, Nyissa, far older and faster than me, had fired her own analysis glyph.

Our spells collided in a flash of sparks and feathers.

“Damnit,” I cried, flinching. “Only one of us needed to do that—”

“Sorry, was reacting to your idea, not your action,” Nyissa said. “I—”

A long black shaft lanced out—and with a terrific report, blasted Nyissa in the face.

Nyissa flew back. Her mask shattered. It would have been so romantic to scream her name and lunge my hand toward her—but both of us had been in fights so many times before, and I instinctively swung the Waystaff up, its spine catching bayonet and flipping the long gun upwards. The hooked beak hissed, striped cloak flapping, and I saw the thing whole.

Towering. Raptor-beaked. Cloaked in tattered striped cloth, draped over a flaring dark greatcoat. Black leather straps bound a tortuously lean torso seemingly rippled with twitching muscle. But the clawed arms fighting mine held what looked like a musket, the striped cloak looked like the ruins of a flag, and atop the thing’s plague doctor mask was a tricorn hat.

“What are you?” I yelled, shoving against the musket with the Waystaff.

The thing screamed at me, foul smoke erupting from its beak, and I flinched and gagged. It wailed at me with its musket, alternately clubbing aside the Waystaff and jabbing at me with the bayonet, as sparking smoke roiled into what I assumed was the musket’s flintlock—it was preparing to fire! I leapt backward, spinning through a knight’s move version of the Dance of Five and Two, hastily pulling together a spell: “Spirit of flame, act as my shield!”

The plague knight screeched and dropped a grimy black ball into its musket—just as my Dragon tattoo uncoiled from my skin and looped around me in a helix of Technicolor scales and feathers. The plague knight fired with a clap of thunder—met by a gout of flame.

Wow! Excitement! Adventure! Tattoo magic versus magical monsters! And while we didn’t get to see that much of the costumes in this excerpt, we’ve got cute vampires wearing sexy clothes fighting alongside our heroine in her long black vest / trenchcoat. What’s not to like?

That is all for now. Until next time, please enjoy this picture of a cat. 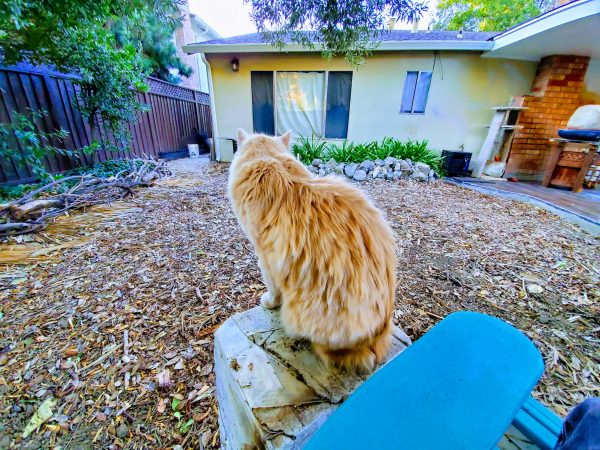