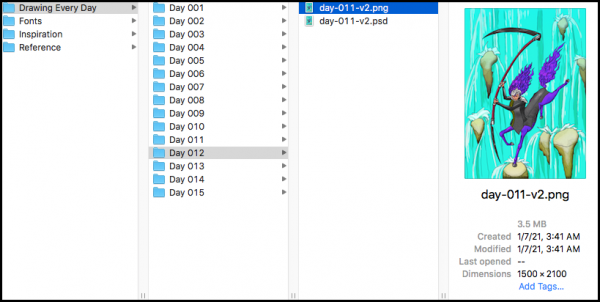 tl;dr: to get good at something, you’ve got to put in a lot of practice

Hail, fellow adventurers! You may have been wondering what’s up with the “Drawing Every Day” on this website. Or, hey, maybe you just got here. But I’ve gotten far enough into it that I feel comfortable taking a short break from developing this habit to tell you about this habit I’m trying to develop. 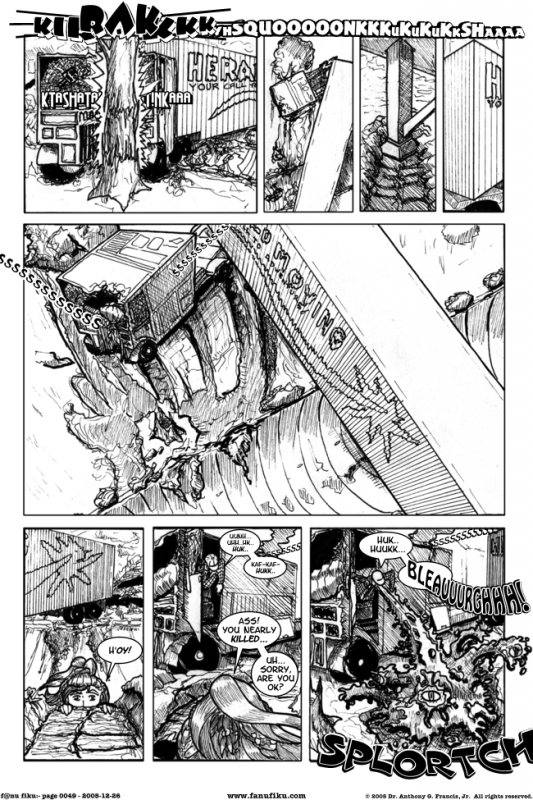 I’ve loved comic books since I was a child. I’ve drawn since I was a young kid. I even started working on comics in graduate school, consciously refining my art until I was able to launch a webcomic, f@nu fiku, partially inspired by anime, manga, and the FLCL anime.

Then I broke my arm. And while I was recovering, someone stole my laptop. I took the opportunity to switch from Windows to Mac, and, as luck would have it, got my first book contract for FROST MOON. By the time I got enough free time from editing and book launches to go back to the webcomic and pick up where I left off, I found out my hand-crafted webcomic software wouldn’t work on the Mac.

The real blow, however, was hidden: my confidence in my artwork had collapsed.

I went from fearlessly putting together two-page spreads way beyond my ability, doing bodies and perspective, and changing my layout theory at the drop of a hat, eventually producing pages that appeared in an art show – to being unable, or more precisely, unwilling to draw at all.

I had become intimidated by – embarrased by – my art. My wife is also an artist, and is familiar with the phenomenon. She and I talked about the reasons behind this at length, and like writer’s block preventing writers from writers, one of the things that really affects artists is simply getting started.

If you’ve only done a handful of drawings, well, then, every one is super important, and there’s pressure to make it perfect. But if you’ve done lots of drawings, then each one is an experiment, and if it doesn’t turn out good, well, then, you can always draw another one. 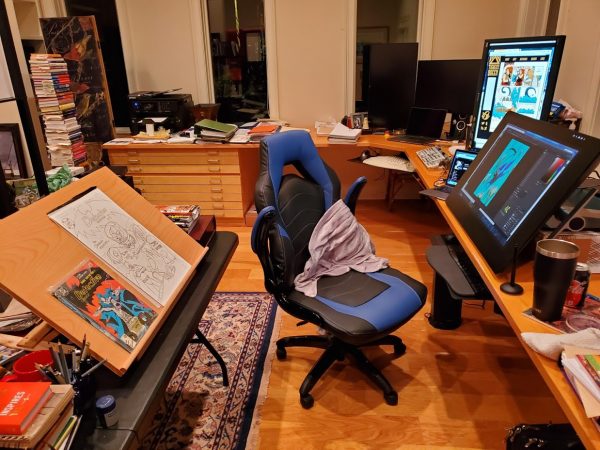 We moved recently, and I made it a priority to set up an art studio. But things by themselves don’t create good habits – believe me, I know: purchasing a keyboard and bass guitar all those years ago didn’t turn me into a musician, because I didn’t build the proper habits around them.

But how do you build a habit if you’re too intimidated to get started? At the Write to the End writing group, we tackle it by sitting down to write for 20 minutes, no excuses. At Taos Toolbox, Walter Jon Williams pointed out that this seemingly small amount of writing per day could produce a novel.

So I started to come around to the idea: what if I drew every day?

There’s this theory in cognitive science that quantity begets quality. A famous example from the book Art and Fear alleges a ceramics professor graded half of a class on quality, the other half on quantity – but the students who produced more pieces also produced the better work.

There are no secrets: if you want to get good, you’ve got to put in the work. (Well, there are secrets, but the secret is, you have to put in a hell of a lot of work to take advantage of them). This is such a common thing in webcomics that it has its own TV Tropes page on Art Evolution.

I really want to draw again. I want to make science fiction webcomics like the ones I grew up loving in the 80s and 90s. But to do that, I’ve got to draw. So, once I finally got settled here and the holidays were in the taillights, once I finally got the Cintiq working … I started drawing every day.

14 days running so far (counting complex drawings that took 2-3 sessions as 1 per session). How long does it take to cement a habit? 2-3 months, it sounds like from the online research; so, a good ways to go. If I keep at it, I’ll have +70 more drawings, five times as many as I have so far.

I bet I’ll see some changes.

I bet if you have something you want to change, start working on it every day, and keep it up for 2-3 months, you may see some changes too.

Best of luck with that! Wish me luck too.