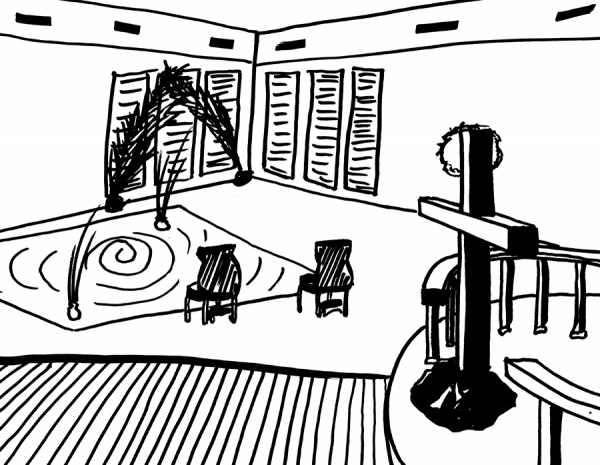 Our journey through Lent nears its conclusion: we have entered Holy Week, which commemorates the events of Jesus’s last days, from His triumphal entry into Jerusalem on Palm Sunday, through Maundy Thursday and the Last Supper, Good Friday and the Crucifixion, and Easter for the Resurrection.

This means more in a liturgical traditions like the Roman Catholic, Anglican and Episcopal churches – among many others – where these events are commemorated in specific rites and masses, such as the Stations of the Cross on Good Friday or the Easter Vigil on Saturday night.

Saint Stephens in-the-Field also did a Good Friday vigil, in which a rotation of people stayed up in the church all nights praying. I’ve done that a number of years, and always found it to be transformative. That’s where I discovered The Formation of the Resurrection Narratives book, for example.

If you’re not Christian, all this rigmarole may seem a bit overdone. If you’re not following something,  focus on it can seem a bit out of place. I recall an agnostic friend who went to see the Pope once, to see what all the fuss was, and was unimpressed to find that the Pope was just an old guy in a bubble car.

But if you believe that the Pope is who Catholics say he is – that the Pope is the inheritor of the Apostolic Succession, that he’s the successor of Peter, who was given charge of the Church by Jesus Himself, who had the authority to do so because Jesus was God – then it doesn’t matter what he looks like.

If you believe, then Holy Week is a chance to relive the key story of the Christian faith – the Crucifixion and the Resurrection – from start to finish, which gives you the opportunity to reflect on and deepen your understanding of Jesus’s sacrifice.

According to orthodox Christian theology, this isn’t something we can ever completely understand, but frankly, I’ve never found the mystery part of Christian theology to be particularly mysterious. Perhaps after quantum mechanics and general relativity breaks the part of your brain offended by strangeness.

God created the world to fill it with creatures who could come to know, love and serve Him – freely, but that free choice means that His creatures can inevitably screw up by departing from His plan. This “sin” isn’t merely a mistake, but a crime in that it departs from God’s plan, and is deserving of punishment.

But God’s not evil, and hasn’t set up a system which inherently allows creatures in it to fall into mistakes which would inexorably lead to punishment. He provided an out, by sending an example of how to behave in the person of His own Son, who sacrificed Himself to take on our punishment.

This sacrifice was particularly potent because the trial was fixed – it’s a perfect example of an unjust trial, and I’ve always felt that doing the opposite of what happened in His trial is a great inspiration for the American legal system – and because Jesus was not only a perfect innocent, but also God.

Holy Week takes us through all the events that led up to this: the obvious signs that Jesus was acting in God’s name, the compassion He had for his followers at the Last Supper, which instituted the Eucharist, the unjust trial, the difficult and torturous Crucifixion, the strange and wonderful Resurrection.

Learning more about the events of Holy Week is a great opportunity to learn more about Jesus, and helps us understand why we should follow Him – even if following Him is difficult and sometimes torturous, there is something strange and wonderful at the end of that path.