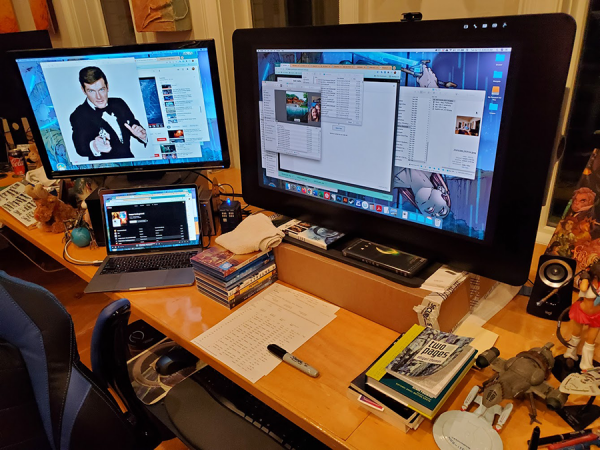 So, I have this particular type of multi-monitor setup I prefer – with a laptop screen abutting two other monitors, one horizontal, one vertical – but I couldn’t quite do that here on my personal setup, at least not at first, because I didn’t want to buy any more monitors after buying that Wacom behemoth, and eventually, the perfectly good ones from the old house will get shipped.

But I had a couple of spare old monitors from previous computers, long since retired – so old that only the DVI ports work, though one of them has an HDMI port I don’t think I got to work. After lots of flickering, the oldest one of them finally gave up the ghost, but the other was able to slot into the same place. (It’s on the left, above, with Roger Moore’s mug from my Drawing Every Day session on it.) While can’t rotate vertically like the other, it worked, at least, and I could use it.

Then it started flickering too.

Now, three or four things could be happening here. First, it could be a flaky old monitor screen, natch. Second, it could be a problem with the monitor’s plug, since jiggling the software cable often fixed it; on the same grounds, I ruled out a device driver issue. Third, since it happened to two monitors attached to the same laptop with the same cable into the same port, it could be the laptop itself giving up the ghost.

So, after putting up with this for weeks, if not months, I finally started to look into new monitors. Apparently, the monitor I want costs roughly a thousand dollars with shipping, but I know I want that monitor because I have one in California waiting to be shipped here.

Then I thought back to my diagnosis.

Two monitors, plugged into the same laptop on the same port … with the same cable.

Now, for various reasons, I can’t swap the ports around much (the Wacom is SUPER finicky about what it wants it’s 15,000 cables to attach to, and if you LOOK at it funny the stylus stops working) and I couldn’t try a different cable because, THANK YOU, Apple and the rest of the computer industry, for changing the ports on all your laptops so my box of cables from previous setups is now virtually USELESS.

But I could order a $12 dollar USB-C to DVI cable off Amazon.

It arrived today. I plugged it in an hour or so ago.

Moral of the story: make sure to vary all of your variables when you are debugging, or you’ll possibly trick yourself into the moral equivalent of spending a lot of unnecessary cash.

Published in Real Life and The Currents